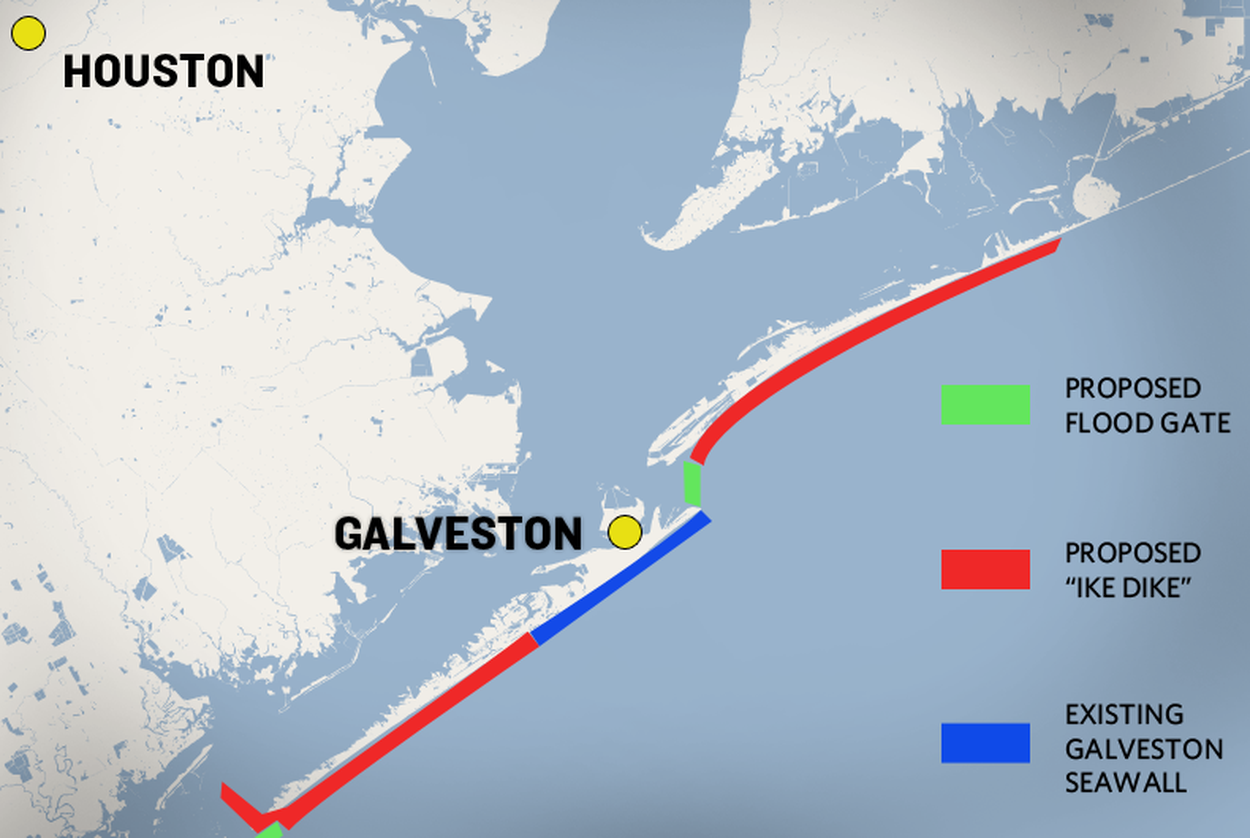 Following years of research, studies and public debate, the U.S. Army Corps of Engineers — in partnership with the state’s General Land Office — has recommended a multi-billion-dollar project that would protect the Houston area and its massive industrial complex from hurricane storm surge.

The agencies had narrowed it down to four plans — one of them with an alternate variation — with varying configurations of levees, seawalls and locks. They also identified extensive “non-structural improvements” — such as beach renourishment and dune restoration — for much of the Texas coast.

On Friday, they announced the selection of a plan that is most similar to a controversial proposal unveiled years ago by researchers at Texas A&M University at Galveston — initially dubbed the “Ike Dike” but often referred to now as the “coastal spine” — that was inspired by a Dutch flood protection system.

The sweeping plan calls for the construction of a levee along Galveston Island and the peninsula to its north, Bolivar, as well as the installation of a gate between the two isles to keep storm surge from pouring between them into Galveston Bay and the Port of Houston. It also includes improvements to Galveston’s existing seawall and a “ring levee” around the heart of the city. Such a structure would protect the backside of the most densely populated area from surge and flood waters retreating to the Gulf of Mexico following a storm.

Other plans that had called for constructing levees further inland had stirred up controversy among residents whose homes would be on the coastal side of the barrier.

Combined with the recommended non-structural improvements — including 2.2 miles of dune and beach restoration along South Padre Island — the agencies estimate the plan would cost anywhere from $23 billion to $31 billion, according to a news release. An Army Corps project manager told the Tribune earlier this month that the coastal spine may cost as much as $17 billion, meaning it may make up slightly more than half the cost.

“One storm can cost many lives and billions of dollars in damage, so the expense of doing nothing far outweighs the investment to protect and enhance our coast,” Texas Land Commissioner George P. Bush said in a statement.

U.S. Army Corps of Engineers Galveston District Commander Col. Lars Zetterstrom noted in a statement that the plan “builds on the work of scientists, engineers and other experts” at A&M and Rice universities, as well as quasi-governmental entity called the Gulf Coast Community Protection and Recovery District that had been formed to study the issue.

The more than 200-year-old agency embarked on the largest study in its history in 2014 to determine how best to guard the Houston area and other coastal communities from devastating storm surge. The Port of Houston is home to the nation’s largest refining and petrochemical complex.

The public will have 75 days to submit public comments on the plan, in person or in writing. The agencies have scheduled six public meetings in late November and December in various coastal communities.

Once a final project is settled on, it will be eligible for congressional funding — a phase with no deadline that many think could take years. A final recommendation is expected in 2021.

“Texas’ coast is home to one in every four Texans and 30 percent of the American oil refining sector resides here,” Bush noted in his Friday statement. The proposal “is about protecting our people, our economy and our national security. The options selected are proven to be effective in mitigating the deadly effects of storm surge on our state.”

Still, the plan has ginned up ample controversy. Some residents worry about how such a large scale project could impact their homes and properties. A coalition of local environmental groups has urged the agencies to more closely study potential ecological impacts and consider more natural alternatives.

“We don’t necessarily think there’s a right or wrong answer but we recognize there are several different directions we could potentially go,” said Bob Stokes, president of the Galveston Bay Foundation. “We want to insist that it’s truly evaluated from an environmental standpoint.

There hasn’t been any structure like this, really, built in the world.”

Still, the agencies stressed Friday in a joint news release that the plan “complies with the National Environmental Policy Act (NEPA) and considers the impacts the project will have on natural, economic, social and cultural resources.”

Jim Blackburn, a longtime environmental attorney who now teaches at Rice University and co-directs the university’s Severe Storm Prevention, Education and Evacuation from Disaster Center, said, “my concern is if we don’t protect the Houston Ship Channel, the damage that will occur will be the worst environmental disaster in U.S. history and we will lose the entirety of Galveston Bay.”

Rice’s SSPEED Center has advocated for a less intrusive alternative to the coastal spine.

The push to protect the Houston area from storm surge through some kind of major infrastructure project has largely been driven by researchers at Rice and A&M who did extensive storm modeling after Hurricane Ike in 2008.

While Ike was one of the most damaging storms in Texas history, they concluded it could have been much worse if it hadn’t shifted at the last minute. Storm models show that if a storm hit near the western end of Galveston Island, it would push a massive storm surge over and between Galveston and Bolivar and into Galveston Bay and the Port of Houston.

In 2009, months after Ike, a researcher at Texas A&M University at Galveston, Bill Merrell, proposed the “Ike Dike” plan.

Merrell said in an interview that a coast-front barrier is the best approach. But he said fine-tuning of the proposal may be necessary.

“We think there’s a lot of ways to make a coastal spine fit into the fabric of the coast and we’re not sure they’ve utilized some of those issues like we see over in The Netherlands,” he said. “There’s aspects of it that might be modified to make the plan more friendly toward Texas or more efficient at surge suppression, so we’re going to look at that and make recommendations if we see some.”

Disclosure: Texas A&M University and Rice University have been financial supporters of The Texas Tribune, a nonprofit, nonpartisan news organization that is funded in part by donations from members, foundations and corporate sponsors. Financial supporters play no role in the Tribune’s journalism. Find a complete list of them here.

This article originally appeared in The Texas Tribune at https://www.texastribune.org/2018/10/26/army-corps-texas-officials-propose-hurricane-protection-plan-houston/.

The Texas Tribune is a nonprofit, nonpartisan media organization that informs Texans — and engages with them — about public policy, politics, government and statewide issues.

Nam and Nick purchased a new construction three plex multifamily property near the Texas Medical...
Read More
Ollie HourGlass A new fresh approach that differs greatly from traditional real estate firms. We...
Read More
004: Apartment Investing in the Houston Marketplace with Lester Langdon Jun 17, 2020 Choosing...
Read More
The Zombie virus temporarily stalled the pace of real estate transactions.  All people with roles...
Read More
Several clients with properties have phoned to get my opinion on the status of prices...
Read More
Questions Did the Corona Zombie Virus change the market or was it just the Black...
Read More
The World Has Become Complicated Five broker skill sets which effect buyers and sellers People...
Read More
Welcome to the Poodle Ranch. These podcast episodes talk about Snakes, Landmines and Grass Fires...
Read More
We get many phone calls from interested parties. Often they need help and do not...
Read More
We help you handle residential and commercial leases. Here below are the parts and forms...
Read More

Taking Due Diligence from Tedious Task to Money MakerOpportunity Zones, Risks and Housing